A funny thing happened on the way to Harvard…
David graduated from Trinity University and was on track for Harvard Business School. All he lacked was the requisite two years of management experience. So when recruiters from a Home Builder visited his campus looking for management-trainee candidates, David accepted their offer. Within the first year he discovered a passion for home building and quickly rose through the ranks to lead his own Team, building and selling homes in a new subdivision. “I liked the company, was learning a lot and doing well,” David recalled. But his visions of a bright future at this company faded quickly when he was forced to choose between his prosperity and his principles.

Would you trade your principles for an Oldsmobile?
They say, “It’s not a principle unless it costs you money." When David’s supervisor wanted to substitute the use of a company car for the bonus he had earned, David took his case to the company president who told him to take the Oldsmobile or take a hike. Although he enjoyed everything else about this job, how could he work for a company that refused to keep its promises? David made one of the most difficult—and important—decisions of his young life. He left with his principles and a dream.

Big brother is watching you.
23, unemployed with a family to feed, David still couldn’t shake the idea of starting his own company. After all, he now had homebuilding experience. He had fire in his belly. The only thing he didn’t have was capital. David’s older brother, Dick, had watched with amazement as David excelled at his first job. To him, it was obvious that his little brother was a natural. So Dick risked everything he owned for a line of credit and the two brothers started David Weekley Homes. Little did they know they would face a challenge of biblical proportions.

In the beginning it was David vs. Goliath.
The world headquarters of David Weekley Homes was a lonely construction trailer in the middle of a field. David was salesperson, purchasing manager and builder. Competing against national companies with unlimited resources, he started with two model homes and an ad from his dad. David’s father, who owned an advertising agency, created a newspaper ad which, appropriately enough, featured David and Goliath. By the time they sold their first homes their $100,000 line of credit was down to $2,000. But David would need more than a line of credit to succeed..

Reimagining the art of homebuilding.
There was no way to compete with the big guys on price alone. The economies of scale were stacked in their favor. But David believed that design was an important facet of homebuilding that had been largely overlooked by the big builders. So he began questioning every preconceived notion about home design. “Why so few windows?”, “Why all the walls and hallways?”, “Why eight-foot ceilings?” As he answered these questions his homes began to stand out for their design. By the mid-1980s he was selling 600 per year…until the bottom dropped out for everyone.

When life hands you lemons, go to Dallas.
Everyone in Houston was in the oil business. They just didn’t know it until 1984. That’s when oil &
gas went bust and took Houston’s real estate market with it. More than 100,000 people lost their
jobs. Housing starts in Houston plummeted from 30,000 per year to less than 6,000. In an industry
where margins were already slim, there was no way to make a profit in this market. David would
have to look beyond Houston’s troubled economy if his company hoped to survive. So he expanded
into Dallas.

Luck is when opportunity knocks and you answer.
David was looking for ways to weather Houston’s real estate crisis when he found a bankrupt Dallas
builder who was selling his subdivisions. Dallas homebuyers were wowed by David’s unique
design approach. He started handing out sunglasses to visitors and running ads that said, “Come
See The Light.” The overwhelming response sustained the company during Houston’s recession and
encouraged David to expand into other markets like Austin, Charlotte and Raleigh. But phenomenal
growth brings a whole new set of challenges. And for these, he was going to need help.

Two heads really are better than one.
Like all successful entrepreneurs, David was great at the fundamentals that made his company
work. But now he was at a crossroads. “I became aware of my limitations,” David said. “I was a
great home builder with a better-than-average understanding of design and marketing, but I didn’t
have the expertise to grow a larger company.” He would find the perfect fit in John Johnson, who
had spent the majority of his career at a national home builder. John was hired as Chief Operating
Officer and was later promoted to President and CEO, with David becoming Chairman. Their
respective strengths proved a formidable combination that would lead to even more innovations and
success.

Standing still just makes you an easy target.
For David, the evolution of homebuilding is fascinating. By the time other builders got around to
rethinking their designs, David was already exploring ways to enhance the buying and building
process for his Customers. A prime example is the rich array of options he introduced that has
blurred the line between custom homes and production homes. Ironically, the company’s Design
Centers create a Customer experience that even custom builders can’t match. David’s insatiable
appetite for innovation kept his company moving forward and the industry on its toes.

Give them the opportunity and your Customers will tell you where to go.
Its human nature: what gets measured gets done. David admits to being “maniacally Customer-
driven.” It’s not unusual to find him on his computer the morning after a phone survey, perusing
results and calling Customers to better understand their needs. As far as David is concerned, the
only yardstick that matters is what his Customers think. And his company never stops measuring.
They survey Homeowners throughout the building process—even after move-in. Then they study
the results, check their progress and share the numbers at quarterly “Excellence Meetings” where
Team Members put their heads together and brainstorm ways to improve.

Your service can only be as good as your people.
David Weekley’s formula for exceptional Customer Satisfaction: Hire your industry’s best. Keep themhappy. They keep your Customers happy. It’s so simple; you wonder why so few companies aredelivering it. Since the 1990s, David Weekley Homes has focused on creating an environment
where Team Members are inspired and empowered. Besides an excellent benefits package the
company regularly solicits Team Members for their suggestions on ways to improve every facet of
the business. It’s easy to see why David Weekley Homes is the only builder to be featured on
Fortune’s 100 Best Companies to Work For seven times.

David is invited to the Magic Kingdom.
The trophy cases at David Weekley’s Houston headquarters are filled with hundreds of awards for
design, quality and Customer satisfaction. The company has been profiled in national magazines
and was spotlighted on NBC’s Today Show. But one of their proudest moments was when the
Walt Disney Company asked them to build in a brand new community called “Celebration” outside
Disney World in Orlando. The folks at Disney had spent two years searching America for builders
who shared their passion for excellence. In the end, David Weekley Homes was the only builder
with the creativity and Customer-driven focus to remain involved with Celebration from start to finish.

And you thought this was about building homes…
A construction trailer sits in a field in the waning twilight, silhouetted against a big Texas sunset.
The light that glows in the window is from a drafting table where a young man works alone with his
blueprints and his dreams. A lot has changed in the 35 years since David started this business.
But David Weekley’s purpose has never varied: to Enhance People’s Lives. This mission extends
beyond the lives of their Customers to everyone from Team Members and suppliers to those who
have never even heard of the company. On any given day Weekley Team Members can be found
raising money and volunteering for a variety of worthy causes. The company also allocates money
each year for Team Members to channel to the non-profit of their choice. And David himself gives
half of his time and half of his personal income to non-profit charities. After building homes for over 65,000 families, some people might think about slowing down,
resting on their laurels. Not David. He’s having too much fun.

To learn more about all David Weekley Homes has to offer in the lowcountry please click on one of the below neighborhoods: 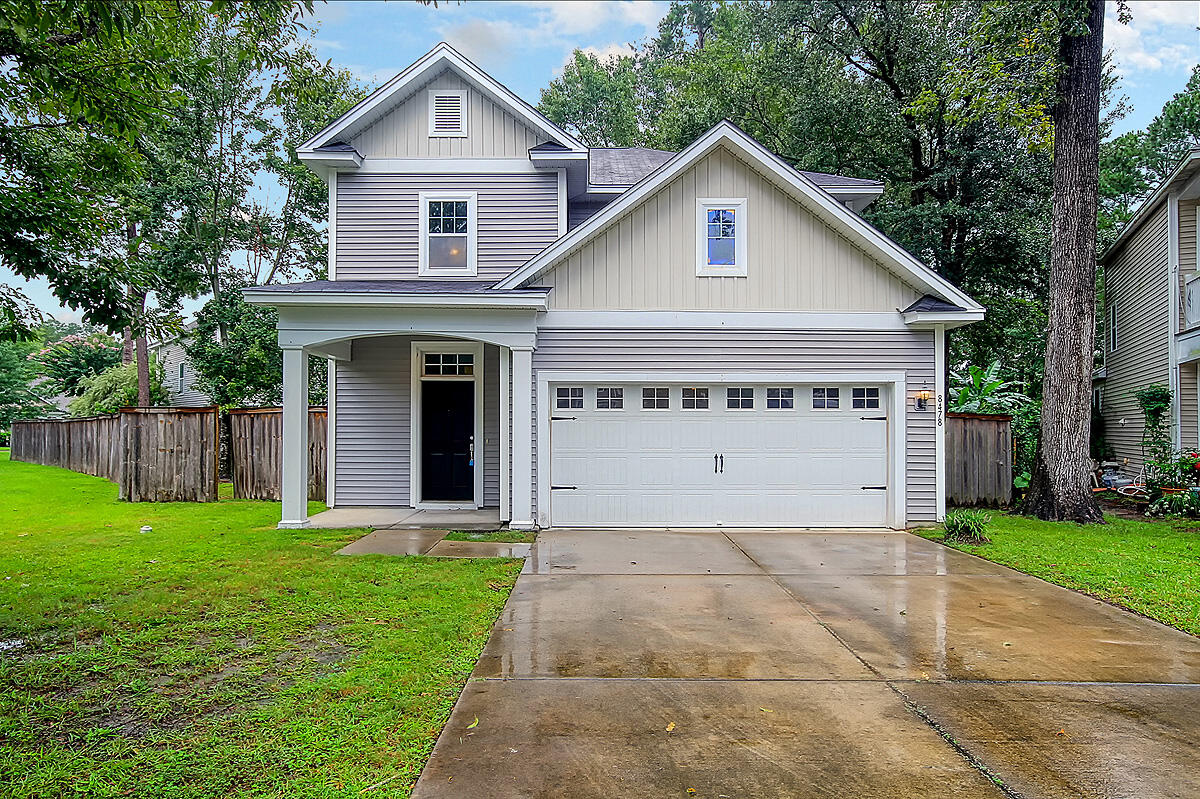 **Seller will contribute $5000 toward buyer's closing costs with acceptable offer**This Traditional home with a cozy front porch rests on a charmin...

The data relating to real estate for sale on this web site comes in part from the Broker ReciprocitySM Program of the Charleston Trident Multiple Listing Service. Real estate listings held by brokerage firms other than Ellis Creek Real Estate are marked with the Broker ReciprocitySM logo or the Broker ReciprocitySM thumbnail logo (a little black house) and detailed information about them includes the name of the listing brokers. Last updated on 10-01-2022 1:06 PM EST . The broker providing these data believes them to be correct, but advises interested parties to confirm them before relying on them in a purchase decision. Copyright 2022 Charleston Trident Multiple Listing Service, Inc. All rights reserved.
Commercial Sale/Lease: Copyright 2022 South Carolina commercial MLS, Inc. All rights reserved. Last updated on 10-01-2022 1:06 PM EST est.

Any images related to data from the MLS is the sole property of the MLS and not the responsibility of the owner of this website.

This real estate website and IDX data is hosted by Dynamic IDX, LLC

It is the mission of Ellis Creek Real Estate LLC is to be the best, full-service Real Estate company in the Charleston area by being the most professional, well-trained and ethical real estate practitioners in the industry. We are dedicated to providing the most professional, informative and fabled service in the industry. We are continually exploring new trends and technology to make the selling and buying of real estate faster, easier and the most cost efficient for our clients. We will always put the needs and the best interest of our clients first and are committed to successfully helping our clients buy and sell real estate with honesty, integrity and loyaly in every transaction.